Richard both prosecutes and defends a broad range of criminal and regulatory matters.

He confidently leads people through difficult and complex proceedings. Richard is a hardworking and dedicated advocate both on his own but also as part of a team.  Richard has worked with a variety of expert witnesses, including cell site experts, neurologists and forensic scientists, and has run a series of seminars on the use of expert witnesses in criminal proceedings. He is the author of ‘A Practical Guide to the use of Expert Evidence in Criminal Proceedings’ released in July 2020.

Richard is regularly instructed to both prosecute and defend allegations of fraud, money laundering and matters involving financial misconduct. He has worked with a range of experts in assisting to build a case, such as forensic accountants to assist with the explanation of transactions and calculation of loss.

Richard is familiar with HMRC prosecutions and is instructed to prosecute and defend matters involving evasion of tax and cheating the revenue. He can confidently and quickly gain an understanding of a complex case and the evidential position. Richard has advised a range of businesses and individuals on the implications of account freezing orders, including challenging such orders. He represented Alex Pabon at the third LIBOR trial (led by Tom Allen QC and Catherine Rabaiotti).

Richard joined the Bar having spent several years working at Peters & Peters Solicitors LLP assisting with matters of fraud, bribery and money laundering both on a national and international scale. In January 2015 Richard re-joined the firm for six months on secondment. Whilst there, amongst other matters, he assisted with the defence of an individual charged in respect of their role in the Barclays-Qatar funding arrangements. Richard also assisted in advising a client facing allegations of bribery to secure a £5m contract.  Prior to working at Peters & Peters, Richard worked as a paralegal at Birds Solicitors.  Richard assisted in the preparation of the case of an individual charged with insider trading in Operation Saturn, at the time the largest insider trading case prosecuted by the FCA. Working closely with Patrick Gibbs QC and Alison Pople QC

Richard is regularly instructed to advise and represent at the stage of confiscation. He is well verse with the complexities of the legislation and practical requirements that come with addressing confiscation orders. Richard has spent time working with the SFO Proceeds of Crime and International Assistance team working on the preparation for contested confiscation hearings. Whilst with the SFO Richard was involved in advising on and preparing applications for restraint orders.

Richard is regularly instructed by a range of local authorities and defendants in respect of regulatory matters relating to use of property, trademark infringements and safety regulations. Previous matters include allegations contrary to the Food Labelling Regulations 1996, Trade Marks Act 1994 and the Town and Country Planning Act 1990.

Richard has represented a broad range of professionals at disciplinary tribunal hearings including BAPC, SWE, NMC, HCPC And GDC. Richard has attended at all stages of the disciplinary proceedings process from interim order applications to fully contested final hearings. Richard is well verse at understanding the particular difficulties and complexities of an individual professionals role.

Richard has a wealth of experience representing individuals at the Court Martial. He has successfully secured acquittals in allegations ranging from sexual assault and assault, to perverting the course of justice and fraud. He understands the importance of his client’s career and future prospects, ensuring cases are fully prepared to trial and advancing the best possible mitigation where necessary.

The backbone of Richard’s practice remains general crime. Richard is confident in presenting complex legal and factual submissions to both lay and legal tribunals. He works well with people of all backgrounds. He can quickly get to grips with cases, and is attentive and appreciative of the importance of detail. Richard draws from his knowledge in writing ‘A Practical Guide to the use of Expert Evidence in Criminal Trials’ in its practical application to the use of cell site and forensic evidence at trial, and proceedings involving mental health issues.

R v AR and others (St Albans CC): Led by Denis Barry, Richard was instructed to prosecute a seven handed allegation of conspiracy to defraud account holders at Barclays Bank. The case involved fraudulently obtaining approximately £500k from a high net worth individual and the subsequent ‘smurfing’ of the proceeds. Trial lasted 7 weeks leading to significant convictions. Richard alone dealt with the subsequent POCA applications in relation to 5 convicted defendants.

R v PB (Birmingham CC): Led by Jon Rees QC, advising and representing PB in response to a section 22 application seeking an increase of £1.5m in an amount to be paid by way of confiscation. This case involved extensive argument in respect of the scope of section 22 to cases where civil proceedings had been commenced.

SFO v RR (Liverpool CC): Representing and advising RR in relation to the on going realisation and enforcement of confiscation order against him, involving the realisation of tainted gifts.

R v TI (Manchester CC): Successful contested application to reduce the available amount to a confiscation order from £225k to £28k. The prosecution alleged fraud on the part of TI which was successfully rebutted.

LBH v AA and ASA Ltd (Wood Green CC): Prosecuting AA and ASA Ltd, Richard secured fines of £100,000 in relation to multiple breaches of enforcement notices, plus confiscation orders cumulatively exceeding £700,000 against the landlord and their company following a successful breach of the corporate veil.

WBC v EH (Reading CC) – Instructed to represent EH at 12 day trial for allegations relating to the operation of an estate agency.

LBE v C Ltd and others (Highbury Corner MC) – Ongoing prosecution against C Ltd and its directors for importing cosmetic products without the appropriate regulatory safety checks and documentation.

ARB v JP (Westminster MC) – Prosecuting on behalf of the Architects Registration Board. JP faced two separate sets of proceedings for holding himself out as an architect without appropriately registering as such with the ARB. Guilty findings in respect of both sets of matters resulting in financial penalties.

LBE v SM Ltd and three others (Highbury Corner MC) – Richard was instructed by LBE to prosecute two companies and their respective directors in relation to the use of a premises for food production. Following acceptable pleas been entered on the day of trial the matter concluded with financial penalties of over £100k imposed.

SWE v SS – Represented SS over a five day final hearing relating to allegations of misconduct in her role as a social worker resulting in the injuries to a child. After extensive cross examination of SWE witnesses and investigators the tribunal concluded that SS was the most reliable witness, with the local authority employer having failed to undertake a full and proper investigation. Impairment found on public grounds only, with SS receiving a 3 year warning order.

HCPC v TW: Currently instructed to represent TW at final hearing. At an earlier hearing successfully argued for extensive aspects of HCPC’s evidence to be removed as hearsay, as well as successfully sought the exclusion of the expert report.

NMC v OD: Instructed to represent OD at a 12 day hearing involving allegations of forcing patients to take medication, whilst with another registrant, when in their care. Successful submission of no case to answer at the conclusion of the NMC’s evidence brought the case to an early conclusion.

HCPC v MS: Representing MS, who was alleged to have undertaken an inappropriate procedure on a patient in labour. Following extensive cross examination of the HCPC’s expert, it became clear that the expert had made fundamental mistakes in their conclusions in respect of what had in fact taken place. All allegations dismissed.

BAPC v SH: Representing the complainant (the prosecuting regulator not represented) in respect of allegations of sexual misconduct towards her by her counsellor. Following extensive questioning of the registrant, significant allegations were found proven with the result that the registrant was struck off.

Re: Cpl C (Bulford Court Martial): Representing Cpl C at appeal against sentence from his Commanding Officer. The initial sentence included demotion of rank. Following submissions in sentence, including the preparation of a mitigation bundle, Cpl C was sentenced to a reprimand and financial penalty without demotion of rank.

Re: Ex Kgn MR (Catterick Court Martial): Secured the acquittal of Ex Kgn MR following a four day trial alleging three counts of perverting the course of justice. The case involved cross examination of 15 individuals who appeared on the face of their statements to support the prosecution case. Upon cross examination matters were not entirely what they seemed.

Re: WO2 P (Bulford Court Martial): Representing WO2 P at trial in relation to an allegation of ill treatment of a subordinate. Following a two-day hearing including extensive cross examination of a vulnerable complainant with mental health concerns, WO2 P was acquitted within 20 minutes.

Re: Sgt C (Catterick Court Martial): Sgt C faced an allegation of sexual assault on a private following a night in his room. The case heavily relied upon telephone communications between the two in the run up to the incident, as well as a section 41 application in respect of the complainant’s previous sexual history in the army. Following a two-day court martial hearing Sgt C was acquitted allowing him to resume his career in the Army.

R v A and others (Canterbury CC) – Prosecution of five individuals, including two youths, for aggravated burglary following a raid on a property involving an extensive number of knives.

R v EC (Harrow CC) – Prosecuting of EC for aggravating burglary, part of a three man group who having earlier scoped out a property returned with weapons, restrained the owner whilst ransacking the property taking items of value. EC convicted after trial, awaiting sentence. 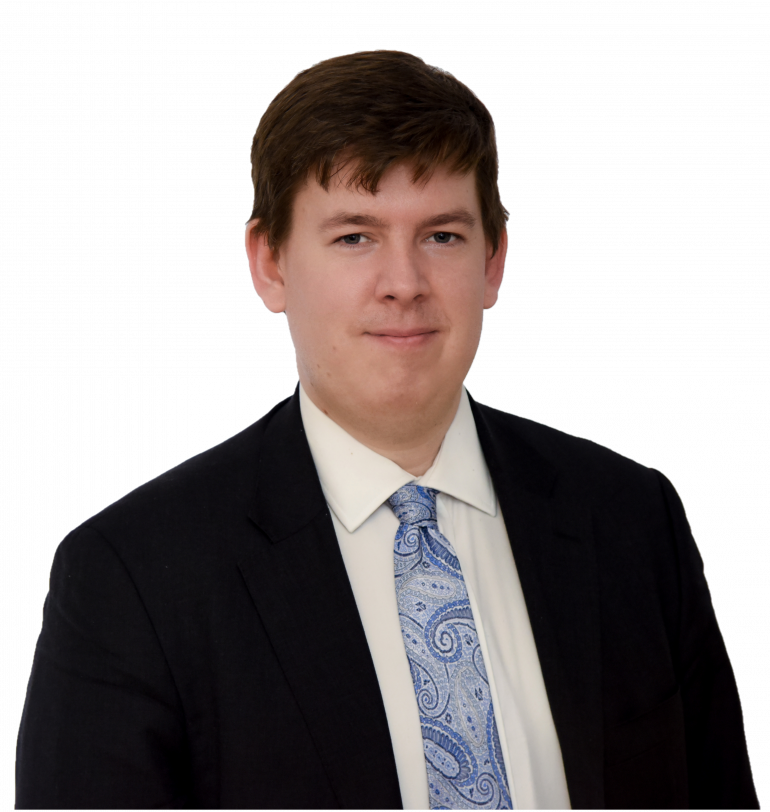 A very bright star at the Bar
Decisive when decisions are required to be made, and can come up with proactive and creative solutions to issues raised by the Defence
Email
PDF
VCard
Call: 2011